Claudio Fenizia, MD, University of Milan, Milan, Italy, and colleagues collected numerous specimens from 31 pregnant women who tested positive for SARS-CoV-2 between March and April, 2020, at 3 hospitals in Northern Italy. Testing for SARS-CoV-2 was done on the mother, the newborn, the placenta, umbilical cord biopsies, maternal and umbilical cord blood, vaginal swabs, breastmilk, and amniotic fluid.

“The 2 babies were found to be positive through nasal swabs taken immediately upon delivery,” said Dr. Fenizia. “One of the babies had IgM in the umbilical cord blood. Keep in mind that IgM are not usually transferred in the blood from the mother to the child, so the appearance of IgM is due to direct exposure of the fetus to the virus.”

“We tested all of these specimens looking for the presence of the virus, and our results strongly suggest and support that vertical transmission in 2 cases,” he said.

The researchers also examined the inflammatory processes in the mothers and the children, covering different gestational ages. They analysed the placenta and umbilical cord blood looking for expression and release of inflammatory molecules.

“Indeed, we found quite strong enhanced inflammatory status in infected women compared with negative controls,” said Dr. Fenizia. “This is not really a surprise, but the placenta was extremely inflamed and fetal blood showed higher expression of inflammatory molecules -- this could be more detrimental than even the infection itself during the pregnancy.”

Dr. Fenizia said that both babies who tested positive for the virus are doing well. One continued to test positive for 1 week after birth; the other appeared to just have a transient infection that was not seen in subsequent tests. He said that since the babies were infected within 2 weeks of delivery, he would not expect that their infection would have a long-lasting impact on their development.

“So far, we are not aware of any consequences of infection in these 2 babies, but it is just 2 cases so it is too early to determine any long-term risk for putative infected babies,” he said. 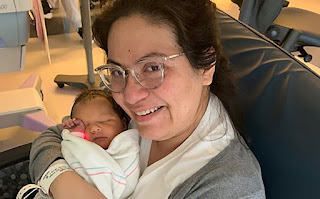 “Our study shows that vertical transmission from mother to child is indeed possible,” said Dr. Fenizia, MD. “This should be considered a preliminary study, and this is basically a picture of women in Italy at the beginning of the infection. There is a question mark as to what will happen if women get infected earlier on in their pregnancy. Further studies should be performed on a wider sample of pregnant women.”

AIDS 2020 is sponsored by the International AIDS Society.