From Heartwire, by Michael O'Riordan

October 8, 2009 (Brussels, Belgium) — A new joint statement from a number of professional organizations has identified specific criteria for the clinical diagnosis of the metabolic syndrome, tightening up the definition, which previously differed from one organization to the next [1].

The statement, published online October 5, 2009 in Circulation, includes the participation of the International Diabetes Federation (IDF), the National Heart, Lung, and Blood Institute (NHLBI), the World Heart Federation, the International Atherosclerosis Society, and the American Heart Association (AHA) and is an attempt to eliminate some of the confusion regarding how to identify patients with the syndrome.

Specifically, the new metabolic-syndrome definition streamlines previous differences related to abdominal obesity as defined by measurements in waist circumference. Substantial disparities existed between the previous IDF and the ATP III definitions of what constituted an excessively large waist circumference, by as much as 8 cm between the two groups, but these have been amended. Now, the criteria for elevated waist circumference are based on population- and country-specific definitions, which, although streamlined, do leave some work to be done, said Eckel.

The new definition relies on different geographic regions, or different countries, to drill down into their own databases in terms of relating waist circumference to risk.

Now, waist circumference is just one of five criteria that physicians can use when diagnosing the metabolic syndrome.

Criteria for Clinical Diagnosis of the Metabolic Syndrome

Notably absent from the joint statement is the American Diabetes Association--there are unresolved scientific issues between the ADA and other associations, including the AHA, regarding the metabolic syndrome.

Specifically, the ADA, as well as the European Association for the Study of Diabetes (EASD), objected to the manner in which the metabolic syndrome was characterized as a risk factor for heart disease or diabetes, arguing that there was no need to diagnose a patient with the syndrome because emphasis should be placed on aggressively treating the individual risk factors.

In 2005, the ADA and EASD issued their own joint statement calling for a critical appraisal of the metabolic syndrome, its designation as a syndrome, and its clinical utility.

Be aware and be well!

This proprietary weight loss system is based upon my 34 years of clinical, academic and research experience.

Further, I incorporate up-to-date world-wide research and current recommendations by the National Institute of Health (NIH) and American College of Physicians (ACP).

sliMDream™   ( aka triMDream™ ) system includes, but is not limited to, following modalities:

· behavioral modification
· suppression of appetite
· smart nutrition with energy deficit
· adequate hydration
· management of sleep patterns and stress reduction
· appropriate physical activity with energy deficit
· metabolic enhancers
· meal replacement
Please call (424) 204-5004 to be directed to a location near you to learn the essential 7 "seas" to success.

Silent Inflammation--a not so silent Killer!

Every wellness-conscious person should be aware of the silent killer responsible for many multi system deadly and disabling disorders. My friend and a colleague Dr. Bary Sears is clear and concise--please read, it might improve and/or save your life!

Be aware, talk to your doctor, get tested and get treated, if needed!
Be Well and remember that it's not the effort that counts, but its effectiveness!
Dr.D.
Posted by Dr.Dorodny at 19:27 No comments:

Back by popular demand!

After focusing most recently on academic and pharmaceutical/nutraceutical research projects, and in response to numerous patient requests, I am returning to part-time clinical practice, where my cross-disciplinary expertise is best put into practice treating patients' bodies and souls in their perpetual quest for betterment! 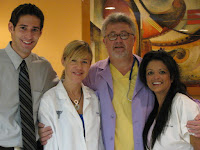 I am pleased to announce my association with a preeminent medical weight management practice with five locations across Los Angeles County, including Encino and West Los Angeles.

This new association allows me to provide overweight and obese patients with innovative, up-to-date, individualized and comprehensive weight-control treatments.

Since 2003 I have been working to integrate established general medical principles with newer holistic and functional approaches.