Call to Action to all Candidates for Malibu City Council

Letter to the Editor

This letter is in response to “Sheriff Baca Slams Idea of SMC Campus in Malibu Civic Center” by Hans Luetz, Malibu Surfside News, 2/28/08

My first encounter with the City of Malibu was in my former capacity as Director, Public Affairs and Government Relations for the Malibu Medical Reserve Corps (MMRC). The reception MMRC, Dr. Dorodny and I personally received from then city leaders and city staff was hostile despite an enthusiastic response from local press including your fine publication.

The Malibu MRC was established by Dr. Victor Dorodny and was the only privately established unit in California operating under the authority of the California Governor through the Emergency Medical Services Authority (EMSA) and under the direction of the U.S. Surgeon General.

By working together with area healthcare professionals, mass media, Los Angeles County Sheriff Department (LASD), Los Angeles County Fire Department, and MMRC sought to provide an efficient way for medical, public health, and citizen volunteers to offer their skills and expertise during local crises and throughout the year.

Since May, 2004 with the support and recognition by the U.S. Surgeon General, MMRC attempted to cooperate with the City of Malibu to integrate MMRCs programs and services into the fragmented and insufficient emergency capabilities in Malibu.

Unfortunately, for the residents of Malibu, hundreds of thousands of visitors and students at Pepperdine University, former City Manager Katie Lichtig under the direction of then Mayor Sharon Barovsky, Realtor Stern and the City Attorney single handedly undermined discussions between the MMRC and the City of Malibu and caused MMRC to lose its State and Federal funding.

Public safety and health services policy matters raised by Sheriff Baca and Supervisor Zev Yaroslavsky have not been properly addressed or vetted.

In the past, Captain Thomas G. Martin from the Los Angeles County Sheriff Department, Lost Hills Station, despite being approached by MMRC leadership concerning Malibu’s emergency preparedness and response capabilities, and specifically in regard to possible conversion of the abandoned Sheriff station into a regional training/operational emergency response hub did not respond to MMRCs numerous requests for support and cooperation. 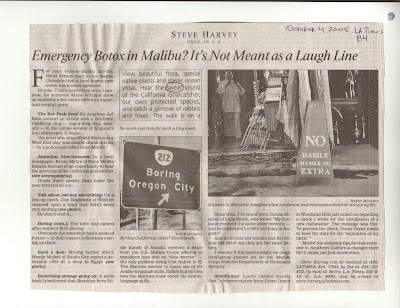 Given the lack of adequate health and emergency services in Malibu leading to constant violations of the “golden hour” standard of care:
I ask and urge all incoming members of the City Council to work with Sheriff Baca, the County of LA to reestablish both the Sheriff station and an emergency clinic/response center on the current site. Dr. Victor Dorodny remains ready, able, and willing to offer his expertise free of charge on a public safety/ health services strategy to benefit the residents of Malibu. He can be reached by e-mail at Dorodny@medscape.com

I also ask, recommend, and urge that incoming city leaders and Mayor Pro Tempore Pamela Conley Ulich create an Office of Chief Medical Officer (CMO) for the City of Malibu on a volunteer basis and that Dr. Victor Dorodny be considered for such appointment.

Thank you for the opportunity to express my views on this critical and urgent public policy matter.