Practical Alternative to Animal Research, or What Amgen Does Not Want You to Know?

Sporadic displays of animal cruelty by the likes of Michael Vick and Ellen DeGeneres usually get plenty of media coverage and generate necessary public outcry. 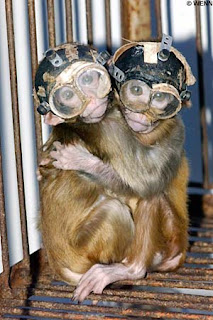 However, ongoing acts of animal abuse committed under the auspices of scientific necessity to “ensure and enhance human and animal health and protection of the environment” remain unnoticed by media and general public (1).

The justification used by researchers for use of animal-only model studies can be found in a handout distributed by Dr. Robert F. Phalen(2) during his clandestine lecture at Amgen, Inc. Corporate HQ October 28, 2007:

“…a large number of values for man coincided with remarkable accuracy for the 70 kg animal”, Krasovski (1976).

“…these survey results support the value of in vivo toxicology studies to predict for many human toxicities associated with pharmaceuticals…”, Olson et all. (2000).

“…the human genome is remarkably similar to that of evolutionary ancient organism. Thus, the various life forms on earth share much more in common than anyone had previously envisioned”. Ballatori and Vilalobos (2002).

The Society of Toxicology (SOT) claims that research involving laboratory animals is “necessary” and that “research animals must be used in a responsible manner”. Therefore, according to Dr. Phalen, it is “…unethical to block or impede well-designed, humane animal studies”.

Unfortunately for animals, and despite the alleged strict adherence to the rules and regulations of the federal Animal Welfare Act (AWA) [P.L. 89-544] and the Health Research Extension Act [P.L.99-158] all animal studies in the world are missing a critical component— informed consent.

Interestingly, both the SOT and Dr. Phalen concede that there are major anatomical differences between humans, mammals, and other laboratory animals that might render results obtained from animal studies to be of limited value.

The SOT and most scientists further concede that animal studies proven less than reliable because in addition to anatomical and resulting physiological (functioning) differences, lifespan of laboratory animals is short; human disease models are generally poor; appropriate “metrics” are poorly understood; mass alone is seldom used; dosage comparisons across species are difficult (3); and individual differences are extremely large.

There are many exciting promising ways to conduct laboratory studies without use of laboratory animals.

With the entire sequence of human genome now deciphered, specific human genetic mutations might be induced and quantified in a cell culture; using organism into which human genes have been incorporated (transgenic systems) and many others. Such methods will enable the scientist to use solid experimental evidence to predict human diseases without use and abuse of animals.

Pending development and practical implementation of these technologies, the SOT’s
stated goal “…scientifically-valid research design to reduce, refine or replace the need for laboratory animals” falls short of offering the only logical solution—use of human volunteers with proper informed consent.

With the high and ever-rising costs of “housing” inmates in our jail system ($45,000.00 per inmate per year in California) and a burgeoning prison population, there is an untapped resource of human volunteers who might be willing and ready to redeem themselves by participating in laboratory studies.

Given prisons being a true society reflection, scientists should not have any problems recruiting age, race, size, gender-diverse volunteers willing to contribute.

Accurate human-derived (hence human-relevant) data can rapidly diminish or totally eliminate the need for laboratory animals now used and abused to ensure and enhance human health and protection of the environment.