There is absolutely nothing funny about Jim Sanders article, “Light bulb legislator strives for bright ideas. Elephants are also on radar of Lloyd Levine, who wants to 'do big things".

Surely Assemblyman Levine might be biting off more than he can chew, but the only people who don’t’ make mistakes are the ones who do nothing.

There is nothing wrong with his applying for “The Bachelor” show (he is an attractive bachelor), or being a “huge Bruce Springsteen fan.”

I don't believe Mr. Levine’s physical stats, his dating, running or musical habits, etc are of any relevance to his functioning as a State Legislator. 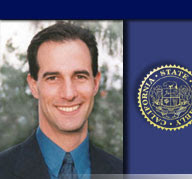 Similarly, maintaining high visibility is critical for any Assemblyman preparing to run for California State Senate.

Levine is definitely not marching to the tune of “Sanders drummers” such as John Benoit and crude former (thank you!) Assemblyman Mountjoy, who would rather prolong the pain and suffering of terminal patients, supported by the Republican Party.

As chairman of the Assembly Utilities and Commerce Committee, Levine drew criticism last week for traveling to Japan with other legislators, regulators and various officials in the energy and telecommunications fields, which his committee regulates.

According to Sanders “…The purpose of the trip was to tour Japan and discuss telecommunications and energy technology”, which is already much better than Pelosi’s trip to Syria that was paid for by US taxpayers and had no stated purpose.

We believe the real reason for this disrespectful article is in direct retaliation for Assemblyman Levine’s on-going support for Californians right to self determination and choices based on informed decisions.

This tongue-in-cheek attack by Sanders and the Sacramento Bee comes on the heels of State Assembly Judiciary Committee approval of AB 374, and in support of undue pressure on State Legislators from the Catholic Church and Cardinal Mahony.

Shame on Sacramento Bee for their attempt to slander an outstanding California legislator, mover and shaker, and policy maker.