People of the State of California v. CMA 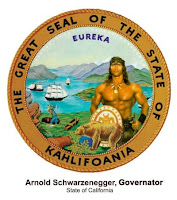 " The decision to humanely end the (animal) life may be necessary in the case of severe injury, incapacitating disease, intractable pain, etc." (AVMA)

The American Veterinarian Medical Association (AVMA) defines the term euthanasia is derived from the Greek terms eu meaning good and thanatos meaning death. A “good death” would be one that occurs with minimal pain and distress. In the context of this report, euthanasia is the act of inducing humane death (in an animal). It is our responsibility as (veterinarians and) human beings to ensure that if an (animal’s) life is to be taken, it is done with the highest degree of respect, and with an emphasis on making the death as painless and distress free as possible.

Most recent well-publicized occurrence--Barbaro was an American thoroughbred that decisively won the 2006 Kentucky Derby but shattered his leg two weeks later. He underwent surgery for his injuries, but he soon developed laminitis in his left rear leg. He had an additional five surgeries. His prognosis varied as he remained for an extraordinarily long period of time in the equine Intensive Care Unit. While his right leg eventually healed, a final risky surgery on it proved futile because the colt soon developed further laminitis in both front legs. His veterinarians and owners then concluded that he could not be saved, and Barbaro was "put to sleep".

Why do the opponents of the recently introduced AB 374, who prefer to use the euphemism "put to sleep", recognize the concept of medical futility and quality of life in Barbaro's case, but deny the same privilege to the People of the State of California? If it was up to Mr. Dunn, the President & CEO of the California Medical Association (CMA), poor Barbaro would still be in the intensive care unit suffering from horrible pain and on life support. Why does the AMVA has more heart and compassion than the American Medical Association (AMA) and CMA?

Why than do AB 374 opponents attempt to confuse Californians by interjecting the bigoted and discriminatory "social futility" concept implying that the indigent , medically undeserved and disabled will be "victimized" by AB 374? Are the opponents suggesting that a "price tag" can be placed on a human life based upon a persons socio-economic status!?

How dare that AB 374 opponents imply that California physicians would somehow be "financially incentivized" to act against patient interest, their life-long goals of saving life, and their moral principles to unnecessarily hasten their patient demise?

Why are the opponents not informing the general public of numerous redundancy guidelines built-in AB 374 and the similar Oregon, Australian and European Laws?

Why are the opponents not mentioning the fact that there has not been even one documented case of the abuse of similar law in Oregon over the past 8 years?

Why is the wavering Governor of California prefer that AB 347 be turned into an initiative?

One needs to vigilantly protect and vigorously defend one's dignit and right to self-determination.