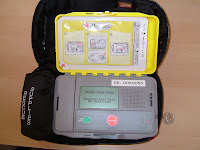 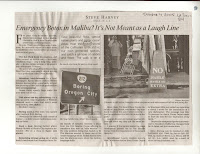 Program was officially launched as a national, community-based movement in July 2002. It was formed in response to President Bush’s call to all Americans to offer volunteer service in their communities. The MRC Program is a specialized component of the Citizen Corps Council, a national network of volunteers dedicated to making sure their families, homes, and communities are safe from terrorism, crime, and disasters of all kinds.

The purpose of the MRC Program is to strengthen communities by helping medical and public health volunteers offer their expertise throughout the year as well as during times of community need. The MRC is a community-based, volunteer unit that supplements existing community emergency response systems during large-scale emergencies. MRC volunteers also offer education and prevention services to improve the health and well-being of their communities.
In July of 2004, Malibu MRC received the official recognition from the Office of the U.S. Surgeon General as part of the White House USA Freedom Corps and the Department of the Homeland Security. The Malibu MRC was established by Dr. Dorodny’s NEW Institute and is believed to be the only privately established unit in California operating under the authority of the California Governor through the Emergency Medical Services Authority (EMSA).

Since May, 2004 with the support and recognition by the US Surgeon General, we’ve been trying to cooperate with the City of Malibu to integrate the Malibu Medical Reserve Corps (MMRC) into the city existing fragmented and insufficient emergency response network.
By applying strong public pressure, educating and shaping the opinions of the general public we were successful with forcing the City of Malibu into participation in the Community Defibrillation project. The City of Malibu purchased a few (not enough) AEDs, but did not deploy them properly and declined repeated offers from MMRC to provide free training to the employees and residents of Malibu.

By working together with area health care professionals, Malibu Surfside News, Malibu Times, Los Angeles County Sheriffs Department, LA County Fire Department, community activists and Malibu City Council, we were hoping to provide an organized way for medical, public health and citizen volunteers to offer their skills and expertise during local crisis and throughout the year.

Unfortunately for the residents of Malibu, visitors and students at Pepperdine University, former Malibu City Manager Katie Lichtig, under the direction of, then, Mayor Sharon Barovsky, and the City Attorney, was the main obstacle who single handedly undermined discussions between MMRC and the City of Malibu.

The leadership of the decertified MMRC, continued its volunteer activites without any support or recognition from the City of Malibu. We continued our efforts to engage the City of Malibu in a meaningful dialogue and cooperation. On November 11, 2006, we forwarded an AMA Interim House of Delegates Resolution "Development of a Federal Disaster Intervention Team” to citizens and City Leaders in Malibu in a good faith effort to educate, engage, and make a difference.

On December 19, 2006 we contacted the Malibu City Council, again, regarding S3678 "Pandemic and Alternative Hazard Preparedness Act, PL, 109-417, signed into law by President Bush on December 12, 2006 (http://thomas.loc.gov/cgi-bin/query/z?c109:S.3678:) This was, yet, another effort on the part of decertified MMRC to establish a cordial working relationship with the City of Malibu.

On the night of January 8, 2007 in response to the horrific TV pictures of Malibu Colony fire, I followed the information on the City of Malibu hot line and City cable channel and took my emergency rescue/critical care equipped truck to the gymnasium at the Malibu High School at around 8.15 pm to provide medical assistance to evacuees. Imagine my surprise to find a small group of volunteers without equipment and supplies, and the shelter that was not officially open.
We are all thankful that there were no human casualties as a result of the fire. However, if there were, the City of Malibu remains understaffed, under trained and under supplied as they were in May of 2004. Please see the photos above of the "Malibu Medical Disaster Assistance Center", the whole 20 feet of it, and the Malibu Urgent "Botox" Care Center, the only care facility, day time only, in Malibu.

Given the devastating fire, property damage, and potential massive injuries and/or loss of human life (if the wind was to shift the fire to Pepperdine), the time has come for citizens and City leaders (who are probably relying on the Angel at the botox center for now), to make Malibu the most prepared City and work together towards recertification of MMRC.

To quote Dr. Dorodny's “Dialing 911” Family Emergency QwikGuide:
"YOU CAN NOT PREDICT. YOU CAN PREPARE. DO IT NOW!"
Posted by Dr.Dorodny at 12:30

In the interest of public safety and provision of adequate emergency medical services in the City of Malibu, we have, again, contacted the Honorable Mayor Kearsley, Councilman Jennings, Councilmember Barovsky, Councilmember Cooley-Ulich, and Councilman Stern on February 14, 2007. We hope to receive their comment, input, and, hopefully, plan of corrective actions.